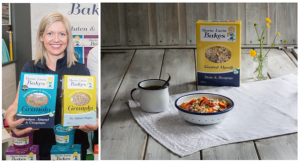 The Irish Quality Food and Drink Awards are now in their fourth year. They are open to all retailers, producers and manufacturers that sell product within the Irish market. Products must be on sale to Irish consumers, whether in-store or online, by the Awards night.

Maria Betts, founder of Maria Lucia Bakes, said, “We are really delighted to be shortlisted in two categories in this year’s IQFDA awards in the highly competitive cereal category against so many well-established brands as well as being shortlisted in the Small Producer of the Year category which is a real honour.”

Maria Lucia Bakes has won a number of awards including a Great Taste Award in 2014 for her Cashew Almond & Cinnamon Granola in addition to Best Cereal in Ireland for her Cranberry, Coconut & Chia Seed Granola at the Irish Quality Food and Drink Awards 2015.